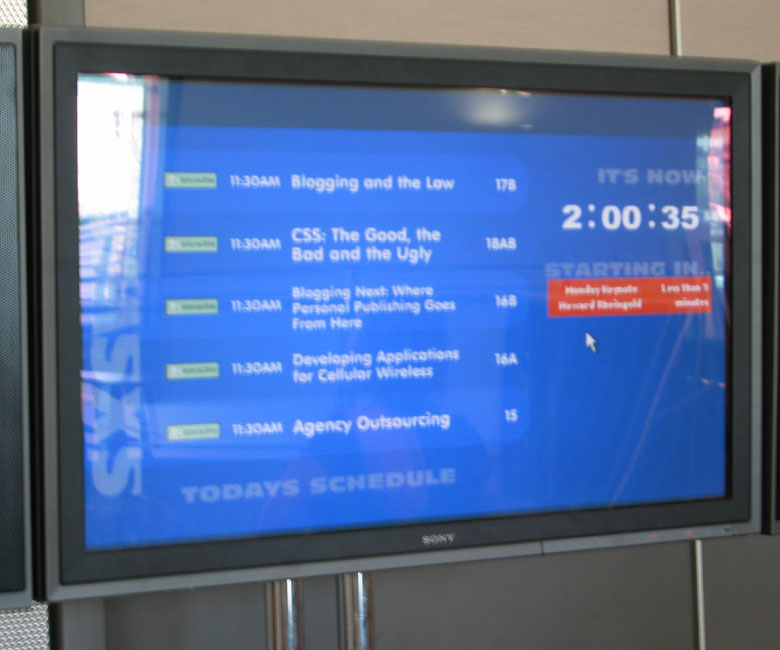 This blog is turning into a "remember when" article generator. I have done a lot of interesting projects and promise I continue to do them now. Here is an old one I did for Hugh Forrest at SXSW back in 2004. The problem to solve was realtime session information on a big screen TV for attendees. Now it is common place, but in 2004, it was pretty remarkable. (Millenial footnote: the iPhone was still 3 years away from launching.)

I can't even remember how I got connected to Hugh, but he wanted to spice up the 2004 SXSW Interactive with realtime signage that would show which sessions were ongoing and which were coming up.

Ultimately this was built with ColdFusion, the Flash COmmunication Server (remember that) and a Flash based frontend. Dedicated laptops were connected to the flat screen TVs (there were only a few of them placed at specific high traffic locations) and what was shown was basically a website running full screen. 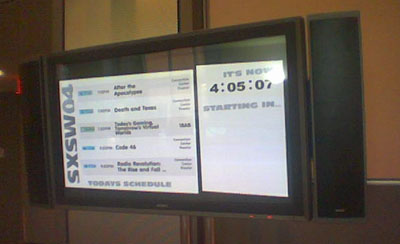 It was launched, it was nice, and I got a SXSW Platinum badge out of it. Fast forward and I run a realtime interactive content company. No Flash though. RIP.

Side note: "Developing Applications for Cellular Wireless". In 2004. Pre App Stores. Pre iOS and Android. That session was going to be a banger.